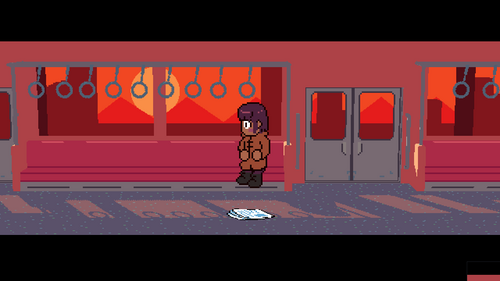 This might be a little too early to talk about the project in hindsight, but I'd like to get my thoughts out before I forget. There's also a thread containing the development process. https://itch.io/t/956299/train-trip-tentative-title

This game called Train Trip was my first project in Godot. Still doing my main project the machine that BREATHES in GameMaker. I've used and bounced from Unity in the past but could never get into it, don't like the separated IDE environment and hate how the simplest things feels like I have to do all by myself. I got into GMS2 2 years ago with my first project being SEGNO both Train Trip and that project have a lot in common, very limited forms of movement, a girl in a coat, very linear, and a large focus on sunset views. Wonder if there's a pattern.

The thing I finally understood with GMS2 and tools in general, is that I very much prefer the tools be mostly an all in one package. No fussing around in photoshop, no alt tabbing to a separate tile editor or some text editor. Unity seems to be pivoting in that direction but there's a huge hill to climb in order to sort out what assumptions it has for the typical game creator.  So where does Godot fit in? Well it feels like GameMaker in some ways, it has an exclusive language (GDScript) that's built into the editor. What I like most about Godot is that it has a lot more prebuilt assumptions than Unity. In Unity I was dabbling with a 2.5D style a lot and wanted the process of converting a sprite sheet into a controllable quad to be so much more smoother. In Godot there's just an object type called a Sprite3D with built in bill boarding and a sprite sheet (+ an animator version of it) that I just drag in and have it working with very minimal code. This made 90% of the elements in Train Trip very easy to deal with.

Most of the game's development though was spent just learning Godot, how to navigate the menus, how to get simple things to happen and knowing what they're for. I would say if this wasn't a factor there would have been more time to add stuff and make the train ride more... eventful. The idea behind the game was to make things relaxing and not too stress inducing. Any gameplay element would be optional and not constant. There was going to be an inventory system where you could give NPCs items you found on the ground or taken from other NPCs. But I opted for a coin collection thing that was originally secondary to the game. Though it fulfils the same purpose, having a reason to check out most of the train.

A lot of development was also spent having a very complicated timeline of the background changing, time of day change, characters appearing and animating into the scene, all while in sync to the train speed or at certain points that were coded in. If I were to do this again I'd probably just use Godot's animation editor as a sort of cutscene management. I realized you can trigger functions, and with the useful "tool" command I could even see how the scenes play out without even testing the game itself. Instead I kind of just test played the game over and over and got a feeling for how much time should pass until the next station appeared.

It's only 8 minutes long so it feels weird to say that 5 weeks of work (on and off) basically amounted to an 8 minute sitting simulator. Also if I were to do this again, and wanted more content, I'd probably just... not make a game where you wait for things to happen. I realize that the main advantage to any kind of exploration in a game is that the player creates their own content in a way, them moving towards a goal is less work for the designer to manually animate something. In a way this game is where the environment explores... an environment while you the player sit there and watch. I don't think this format is inferior or anything, it's just something to keep in mind if I ever try to make an on rails segment or cutscene heavy game again.

Overall it's hard to say if this type of thing takes more work than your average action game. The godot learning curve was a huge factor and I think I was more concerned with making sure the graphics were just correct enough to see how far I could push Godot's lighting into the stylized territory. I do think Godot needs a better built in lighting engine though, it doesn't quite in the mark when it comes to wanting light not to leak through polygons or having the edges be the way it needs to be. Though the neatest graphics feature godot has is probably the one cel shader lying around, which allowed to manually texture the lit/shaded areas to any color I wanted, even applying it to sprites. I detail it here in the first post but I feel really confident in using this technique for later games that I make.

As small and tiny this project is, the development process has convinced me to switch to Godot after I finish Machine in GameMaker. It's definitely a decent proof a concept to myself. I want to go forward in doing a 2.5D paper cut out style. Environments in 2D feel lacking to me as a creator, it's hard to make places feel spacious and interesting without a lot of work (fake elevation being one of them). With 3D there's an inherent ease of use in creating a space and letting collision meshes do the work. Sprites I think are way easier to animate and make than 3D characters though. A lot of these preferences are more out of creative necessity than just an observer point of view. We'll see how this goes, but I need to hold myself back so I can get a damn game commercially shipped at this point.

Stay safe and keep your stick on the ice.

Great Read. Liked the Red Green nod at the end there 🍁 ;).

"Instead I kind of just test played the game over and over and got a feeling for how much time should pass until the next station appeared."

Yeah, this is one of the hardest things to figure out. While animation will always be incredibly tedious, it might've been just as equally hard to figure out, how to achieve the same effect, while also trying to queue up these transitions, through player interaction sequences.

Like, you may have had a game that could've been finished in less than 8 minutes. But it probably would've taken longer than 5 weeks to make, just trying to figure out, through planning and polishing, how each sequence would move on it's own after each player interaction - but this is definitely worth researching for future projects, so if you do plan to use this idea again down the road, you'll know how to and be able to do that very quickly.

Looking forward to more with what you're working on. I remember talking to SplashKhat and even though he mostly worked with 2D sprites in his Newgrounds shorts, he desperately wanted to move on to something that would allow him to work in 3D, because it would have offered him more control over, not only the perspective but the composition of his movies.

Stuff like Grandia, Thousand Arms and Xenogears, even though those games still utilized 2D sprites, involved a lot of 3D camera work, and often that 3D camera work, gave a better sense of emotion in a particular scene than what 2D or FMV could do alone.

2D in a 3D environment, might be the route worth exploring. Looking forward to what you work on next.